This patient was also age 37 when her first baseline thermogram showed a slight hyperthermic asymmetry in the upper right breast. The follow-up study showed the pattern had become more well defined and although clinical correlation did not find anything remarkable it was decided to repeat the exam again in a further 3 months, when again significant changes were seen. Mammography was performed at this stage with the thermographic guidance of the locally suspicious area at 1 O’clock to the right nipple. The mammographic findings were inconclusive and the patient was referred for a repeat mammogram in 12 months. Thermographic monitoring was continued and at the fifth comparative study at 12 months significant changes were still evident and the hyperthermic asymmetry (temperature differentials) had increased. Immediate further investigation was strongly recommended despite a scheduled mammogram in 6 months, and at the patients insistence a repeat mammogram was performed which clearly showed a small calcification (1 mm) at 1 O’clock. Within one week a lumpectomy had been performed with good margins and the pathology confirmed as a malignant carcinoma (DCIS).

This patient has now had stable thermograms for the last 2 years and is expected to remain healthy. 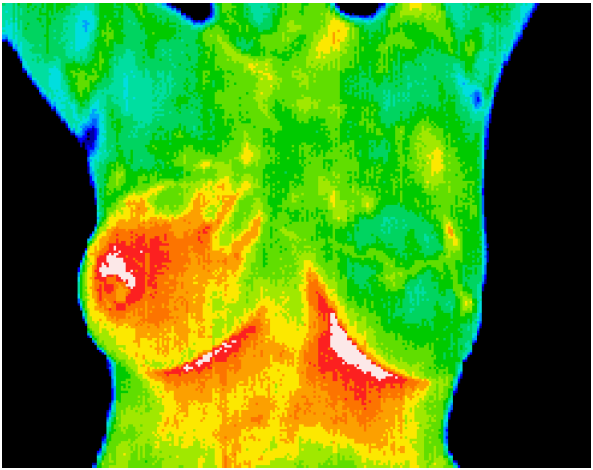 The results of this routine study led to the diagnosis of inflammatory carcinoma in the right breast. There were no clinical indications at this stage. (Thermography can show significant indicators several months before any of the clinical signs of inflammatory breast disease, skin discoloration, swelling and pain). Inflammatory breast disease cannot be detected by mammography and is most commonly seen in younger women, the prognosis is always poor. Early detection provides the best hope of survival. 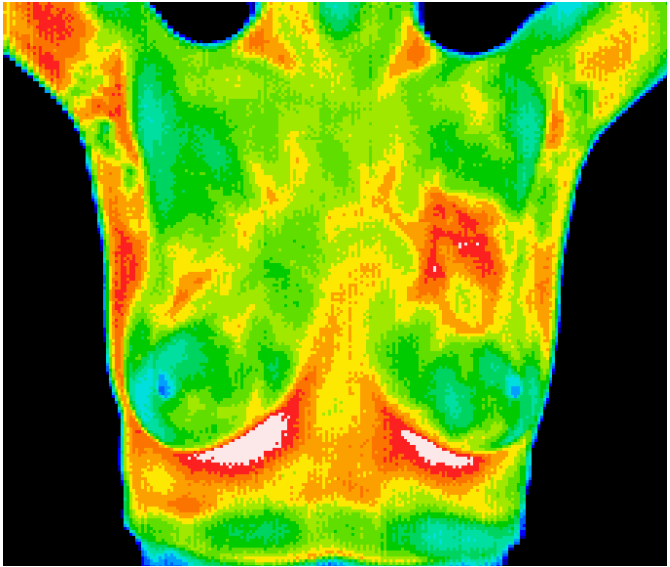 This 37 year old patient presented for routine thermographic breast screening, she was not in a high risk category and had no family history. No breast exams had been  performed previously. The vascular asymmetry in the upper left breast and the local hypothermia at 11 O’clock was particularly suspicious and subsequent clinical investigation indicated a palpable mass at the position indicated. A biopsy was performed and a DCIS of 2 cm was diagnosed.